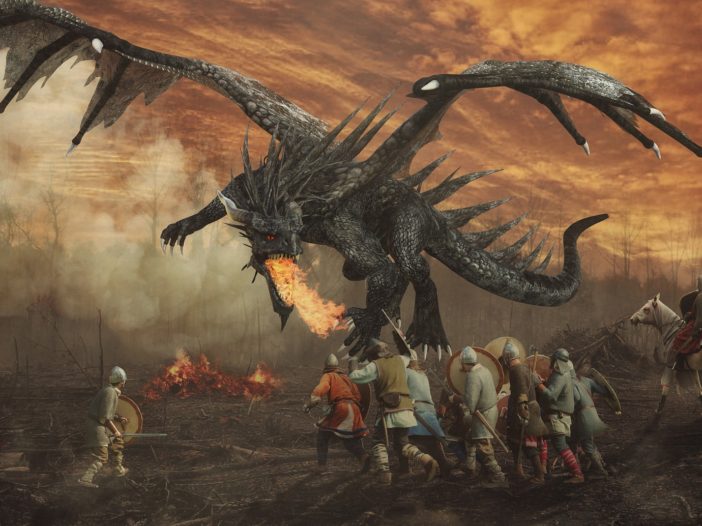 They say that size doesn’t matter, but ‘they’ are wrong. In WFRP 4e size very much matters and what you do with it also counts.

I am of course referring to the size rules on page 341 of the core book. However, as much as I like those rules I think they are incomplete. There are two distinct instances that have been overlooked and I want to try and address that now. Some of this you may already be doing in your game, but if not I hope it adds a little more realism and depth for you!

If you are outnumbered in WFRP 4e, attackers gain a bonus to hit you. This might be +20 or +40 depending on how many opponents you face. Now this is all fine and dandy when it’s against opponents that are roughly the same size as you, but really should it be possible for three halflings to outnumber a dragon?

So to counter that ridiculous situation, here is an option to fix things.

Sometimes combats aren’t always neat and tidy, and you may have creatures of different sizes trying to outnumber a large creature. In that case work out the size difference of the largest creatures involved and apply that as the bonus.

Example: 2 halflings and 2 humans are attacking an ogre. Normally that would be a 4:1 ratio and would be very bad news for the ogre. However, using the new rules we count the size difference between the humans and the ogre as a bonus. The humans are Size (Average) and the ogre is Size (Large), so the difference is only 1. However, that means the ogre now counts as 2 opponents and the ratio thus looks like this 4:2, which can be written as 2:1 The ogre is still outnumbered, but not by as much and stands a better chance of surviving.

If you are using the optional weapon length and in-fighting rules presented on page 297 of the WFRP 4e core rulebook, you might have had to do some mental gymnastics trying to reconcile those rules with fighting something really large, like a giant. How can it be that a giant using a hand weapon (a club for instance), has the same reach as a regular old human also carrying a hand weapon (a sword for instance). The giant’s hand weapon is clearly going to be much larger than the human’s, not to mention the size of the giant’s arms are going to give it a much greater range, and so clearly something needs fixing!

When using the weapon length rules, count the step difference between the weapons of the combatants. If the smaller creature has a weapon that is equal to or greater in size than the larger creature’s, calculate the creature Size difference and apply that as a negative modifier to the previous number. As long as the number remains positive, the smaller creature retains the length advantage. If it drops to zero, they are evenly matched. If it goes below zero, the larger creature can claim the weapon length advantage.

Example: Crabapple is a plucky halfling facing a huge (to her) minotaur. Crabapple is using a quarterstaff against the minotaur’s axe. The quarterstaff is a Long weapon, while the axe is a simple hand weapon and therefore Average length. Normally that would mean Crabapple has the advantage due to the weapon length rules, so the minotaur would have a -10 penalty (on top of anything else) to attack. However, if we take into account the creature Size rules, then things turn out a little different. First we work out the size difference between the two weapons. Crabapple’s quarterstaff is Long, which is only 1 step greater than the minotaur’s axe which is Average. Next we calculate the creature Size difference and adjust things in the minotaur’s favour. Crabapple is 2 steps smaller than the minotaur, so that +1 from the previous stage is reduced by 2 and is now -1! That means the minotaur has the length advantage. Crabapple will find it harder to hit the minotaur, instead of the other way around. The minotaur literally finds it easier to keep the hapless halfling at arm’s length.